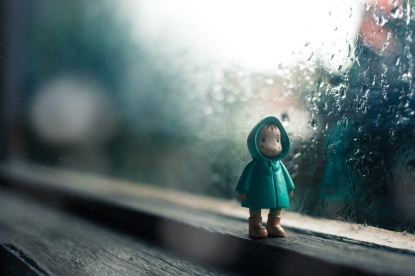 t has been recorded that during times of crisis in history people in general did not suffer from depression. Of course then I think “well who was interviewing these people at this time and when you are facing the threat of death of you or your loved ones or your community, who is going to have the time to question how they feel?

Melancholia must be commonplace in such challenging times. Fear, worry and plain old survival would be the priority and looking into your emotions, much more a luxury. During times when disaster strikes people tend to join up, help each other, lean on each other, tend more to be of SERVICE to each other and find MEANING in the moments of reprieve, along with laughter, and a sense of common connectedness.

In my life when I faced the so called black dog of depression (As Winston Churchill phrased it) It arose in several areas that soon joined into a mangled clump. One was around grief and loss (which can be referred to as natural situational depression) and the others occurred due to not wanting to face profound changes that needed action to be taken on or finding myself at a place where there was a deep sense of ‘de-pression’ due to lack of meaning in life.

People who suffer depression (in general) seem to have lost a sense of true meaning in regards to their place in the world and their relationship to it and themselves.

Please not that I am not referring to people who suffer from clinical depression.

A possible dialogue of a sufferer of depression

I get a picture of many of those suffering being awake at night after all the so called ‘well adjusted’ people have gone to bed.  The dark time is when supposedly the world has stopped for 8 hours. You wont be getting calls from a worried relative, or being harassed by the credit card company or hoping no-one knocks at the door. The dark time of night is when the depressed person usually feels ‘ok’ to be awake. No one is judging, no-one is watching to see how you are not what you think you should be.

So the night is yours undisturbed. You can watch what you want, do what you want, without any guilt. Then in the wee small hours you fall into a deep sleep and awaken to a telephone call which you try desperately to hide from. You pull the blanket further over your head and nuzzle deeper into the pillow. The phone finally goes silent and you let out a sigh of relief but at the same time a heavy de-pressing feeling weighs your body down knowing its daytime and you are meant to be a participant in it. You pull deeper into the darkness of the blanket and weep a little or rage at yourself a little or a lot. You just don’t have the strength the meet the day. You feel too insignificant anyway. No one will notice if you are not there. Darkness becomes more of a comforting companion and the fear of the light tends to push the person deeper into their own shadow.

The world is chaos and chaos is rampant. The extremes between the poor and the rich are widening and justice, well that has become somewhat of a farce even in the courts of law.  “What’s the point?” The melancholic person says. ‘Its all shit anyway’.

A well known term used by depressed people is ‘But’.  The word “but” is a deep resistance to the changes that are taking place within them.

One thing they do have going for them is an incredible sense of RESISTANCE. It’s like a child standing with its arms crossed over its chest saying ‘I don’t want to, you can’t make me!’ This is will power turned inward.

Let’s look at depression now from a spirit based perspective.

We all have life force (otherwise termed as energy) This life force assists in keeping our body alive and functioning even when we are asleep.

When one is in a state of depression, the life force is compromised, blocked and pushed down and inward. Much like trying to shove too many clothes into a small suitcase.

This life force is symbolically covered with a thick grey and heavy wet blanket.

If anyone were to get up and function with a big wet heavy blanket covering  you day in and day out, you would be struggling like those in depression are.

Depression is a heavy energetic weight that is carried around within the psyche and aura. It dulls the mind, the senses, the passion, and life force in general.

No-one likes being in that place and fight it like a dog gnawing off its leg. Which does the dog no good and just increases the suffering. They don’t accept that this big blanket that has been thrown over them will not go away by struggle or self loathing or blaming others. They may try going to a therapist for what they want as a ‘fix me’ solution and for a moment throw off the blanket feeling the placebo vibe take effect but soon the blanket returns and they moan of the waste of money and why didn’t it ‘fix’ them. The therapist is then put on their judgement list or they judge themselves to be a hopeless case. Most commonly, both.

The blanket, as much as one may not like to hear it, is owned by the person who is de-pressed. It does not belong to anyone else. It may well have been triggered by someone else or got wetter and heavier due to outside circumstances but the blankets owner is the one who is under it.

The blanket is a teacher.

Like the influence of the planet Saturn, it restricts you for a purpose and this purpose has a teaching within it. It is offering you to look deeper within to see where along the line you stopped and became stuck and rather than changing tack you stagnated.

One needs to move to the time before you became depressed when you were ok. Move slowly along the time line of memories and see where it changed. That moment is like a key to a lock. That is the moment where you need to give your attention to.  It’s in that moment that you may have lost a part of your sense of life force and from then on the blanket just got more sodden and heavy. A huge p

art of your consciousness may well be stuck there.

Are you able to forgive yourself in that moment? If not, why not? Is it worth holding onto? What is the payoff for keeping the blanket close?

People that are depressed have very low motivation because of the heavy vibration.

There is great power in resistance.

I mean look for example at the French Resistance!

The resistance when in a state of De-pression is turned inward with anger.  Start by pushing the resistance outwards instead of inwards mindfully with the breath so you have some space. I don’t mean push your anger outward. I mean use the ‘but’ and the ‘no’ productively and give it a better job than blocking everything.

People suffering from depression are in general very unkind towards themselves. This is a big learning curve and the hidden message within de-pression. So give yourself a little grace, go talk to your inner child and ask them what they need from you.

Learn how to be accepting and gentle with your inner child and in turn you will benefit.

Blessings and gentleness to those in need. May these few tips offered be of service to your growth.