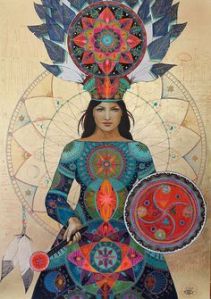 I have often listened to clients who have said they have experienced past lives through either a psychic telling them, a flash in a meditation or on a drug induced trip, or a regression into a life with a regression therapist.

I often ask about that life and what they experienced in it. What I found is that there is not much healing of the life included in their experience. It’s a visit to a life, a look around at patterns perhaps that are similar to this life and then that seems to be it.

After years of exploring, having sessions in  past life and hypnotic regression and experiencing other lives during rebirthing training I still felt that knowing I was an American Indian or a Witch who was hung was not enough. I saw a pattern of standing up for those that cannot speak but no healing came from it. I was killed lifetime after life time for speaking out against those that were untrustworthy.

Before I left Australia for the UK. I had a past life regression session with someone and I was left carrying the grief of that life around for a good while until I found my soul training in ‘Contemporary Shamanism’ in Devon England.

You see I was trained differently and that has made all the difference to my calling.

My training was so much deeper than just a visiting exploration. What I learned was that journeying into other lives has little point unless one can heal the wounds from that life and access the gifts.

Let me share with you a real life story as an example.

I once journeyed a young priest in the making. (I know! Who would have thought that a young priest would be interested in Other Life journeys!) He came to see me due to being deeply conflicted whether to continue on the path of priesthood or to seek having a partner and a family. He arrived wearing the collar that a priest would wear. I thought how interesting at the time that a collar covered the throat chakra perhaps even blocked it. Anyway, I sat beside him guiding him through into non-ordinary reality till he found himself in another life. This life was of a Tibetan monk. He had arrived there as a child and been there for many years. Never knowing any other way of living or being. He was accepting of his life but felt like it wasn’t necessarily his choosing. As we moved through the life towards and through significant events it became clearer to him and more real. He felt deeply connected to the life more and more.

I then asked him to move to the time of his death. He saw himself being beheaded by a soldier in the Chinese army, along with many other monks who stood nearby. He remembers knowing and accepting he was going to die, feeling the metal sword moving through his throat and then quickly leaving his body.

This is where there is significant difference is between Regression and Other Life Healing.

I asked him a few questions in reflecting back on his life and then we moved the whole of the spirit body to a neutral healing place of his choice.

There I asked him to look within the body and tell me what he saw. He saw parts of the sword embedded in his throat and his head was hanging on by a few veins or similar as it had not been fully cut off.

We called in spirit assistance and did what resonated with him in how to remove the metal fragments, re-attach the head and then deal with scaring. The metal went into a bucket of light (source), as did the broken scar tissue and bits of rust. His neck and head became naturally aligned and back into place. I guided him to look into the spirit body of that life and to see what feelings still resided, e.g. feelings of hopelessness and guilt at seeing other friends be killed and doing nothing to stop it etc. Which were willing cleared out of the body through a technique I use.

Then we looked at a very important aspect of the life in Tibet. What symbolized being a monk for him personally? It was his weathered robe and his Mala beads strewn around his wrist and hand. I asked him would it be Ok to now let go of that symbolism so he could have free will to choose his calling in this life rather than feel duty bound to it?

He was more than willing to let them go into the bucket of light. And as a Buddhist in that life, he understood that, attachment was not necessary.

What was left after some more clearing was a glowing light body without the wounding and the vows and promises embedded in it.

The light body then dissolved naturally into the source and he returned to this life, this body

He shared how much more peaceful and lighter he felt. How he felt free, really free to make the choice now rather than to feel if he didn’t somehow he would fail at what he thought he ‘must’ do.

I heard back and he had decided to take a year off from his studies and work part-time in a place connected with his faith but without the ‘program’ that had walked with him from that lifetime. I knew that whatever decision he made after that year would come naturally to him. My gut instinct feels he chose faith and family without the monastic celibate contract.

Other life work can be enjoyable, fascinating and healing. I do not consider myself a healer. I am a spiritual midwife and wound tracker who guides people to their own inner healing…. which if you really want to you, are capable of doing.

Why carry the burdens from another life? That may indeed lead to repeating the same lesson again and again without growth. When one cleanses the wounds, vows, and beliefs of other lives then one is completely free to choose what path one takes in this present one, gifts and all.

14 thoughts on “The Difference Between ‘Hypnotic Past Life Regression’ & ‘Healing Other Lives.’”