“Woman is by nature a shaman.” Chukchee proverb

The word shaman, or Saman comes from Russia (The Tungus people) the word ‘Shamanka’ was used to be helpful in describing a female shaman.

Throughout history the majority of writings and teachings known world wide on shamanism and spirituality, have been from the masculine. The male has been and still to a great degree is, the voice of authority when it comes to major views and decisions worldwide.

When we read back through mainstream history, the references to women and their power come mostly from the time of the Goddess, but little is written from the eyes of the women in rites of passage and religious doctrines since then. The women that have been written about e.g. Mary Magdalene and Jeanne d’Arc, have either been falsely represented through the eyes of the masculine or killed for their courage in speaking up or both.

This article is not an attack against men personally. As a woman that grew up with older big brothers and one that loves my male friends dearly, I am not a man basher in any way.  This is merely an observation of how the ‘masculine’ has possessed and controlled a great deal without the acknowledgement, inclusion and respect of the ‘feminine’.

Both qualities reside in all of us.  The yin and yang symbol is a representative of that regardless of sexual orientation. The feminine/yin has been exploited, misused and misrepresented throughout history. During the times of the Goddess many sacrifices were made and much blood was shed. The feminine in a state of imbalance can be just as cruel and heartless as the masculine.  Both the worship of ‘gods’ and ‘goddess’ has been used and abused in the name of power and competition. One icon replacing another with both out of balance.

If we look at the religious teachings there is very little written ‘by’ women or spoken ‘by’ women. Even today, looking at a snippet of the Popes induction, I could not see a woman amidst the hierarchy, nor do we see them there within the other monotheist religions and strong predominant cults of the world. The masculine still sits at the top of the ladder.  Within shamanism as with others many teachings have been heard primarily through the voice of the masculine.

Woman’s power has been terrifying men for centuries. Bleeding women were seen as dirty, sinful, wanton and cursed. It was actually called ‘The curse’ by women themselves. Rather than honored for their life giving gifts women were shunned and excluded.  Even today there are western based Ayauasca ceremonies where women are banned. In my view the reason is that the male guide cannot cope with the power woman experience when they are so open.

The majority of women hung, burnt and drowned were killed because of their natural ability that ALL women were born with. If the bleeding time is guided well it can be a medicine in itself as a way of clearing that which has been denied and a renewing of the psyche. It can be a guide to what needs work rather than a collective self-imposed curse.  Those that have passed through or passing out of the bleeding times are now bleeding within and the wisdom grows stronger if we allow it.

Women by nature are more private in their service to the medicine. As the feminine is akin to the dark of the moon it is yin, receptive inward, morphing with the great empty. The service is yielding, intimate, nurturing, awakening and maternally strong. The masculine is akin to the light of the sun it is yang, action, outwards, thought, intellect, electric and focused. In combination these qualities can be powerful medicine.

Both men and women are able to acquire both abilities but the development of the practice is individual. As am sure you have met men who you have found more receptive and nurturing than some masculine driven controlling women.

There are now women in the world that are braver to speak their truth. Some come across more male than any male I have met which shows that we still have quite a long way to go in finding balance. A woman does not have to be a man to be strong but that is the example of power many understand. What is sad is that women have become woman’s worse enemy and often times would rather slander a woman of substance and principles than to support her….As I said, we have ways to go.

If all the woman had stood up when others were being hung, burnt or drowned, in support of their relationship to the earth rites, its medicines and the unseen worlds, it would have brought great change but the fear that has been instilled in many women even today is very strong. There is a collective unconscious pattern in many women that fear to speak their truth and practice their medicine because of some deep held pattern that says they will suffer some form of persecution and unfortunately much of that persecution has come from other women supporting men in their criticism of a wise and empowered female.

One of the most well-known book about shamanism is by Mircea Eliades “Shamanism: Archaic Techniques of Ecstasy” a book that is advised to read in relation to understanding the origins but many don’t know that he viewed female shamans as degeneration of an originally masculine profession even though from Mongolia to Africa, it was well known that the first shaman was a woman. It’s a fact that women have been at the forefront of this field worldwide, and in some cultures, they predominate. There is much more evidence to back this up but not in the accessible mainstream and certainly not available or taught to young girls or women. 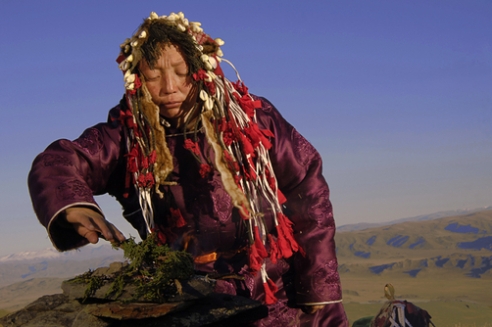 Female shamans have often been tried as witches as there is a similar relationship to the respect of mother earth, use of herbs for healing and the ability to travel within unseen worlds and offer guidance and healing. Even on All hallows eve, little girls dress up in ugly witches masks and still believe they are something to do with the devil and black magic. Women and their practice of medicine are still to this day steeped in contradictions and misunderstandings.

Carlos Castaneda is well-known author even if one knows little of shamanism. Masses have followed his adventures into ethno-botanical worlds, as did the well known Terrence McKenna who took the psychedelic shamanic modern influences into the era of the Internet and beyond.  However the majority of this medicine is via the plant world access rather than the natural pathways devoid of ethno botanicals

A little more is known of Castaneda’s female apprentices, Florinda Donner-Grau, and Taisha, but only because they were his students. Both women wrote well from the female point of view but only a few books each and since then they have disappeared and never been located. For myself Taisha Abelar insight on sexual recapitulation is a gift to women kind.

Looking up well known shamans or those that practice the medicine throughout history and even today, is easy, it’s pretty much all men. Looking up well known female shamans in history, well you will only find the information within women’s studies, and not anywhere near the same exposure as men have had.

However within today’s world of modern contemporary shamanism, there are some women who stand out and who in my view are an offering great guidance. Sandra Ingerman is one of those. I remember reading her book ‘Creative Visualization’ and ‘Soul Retrieval, so many years ago and I can still feel how both books made an impact on my life and my path towards the medicine I practice today. Sandra’s language is a beautiful balance of both the masculine and the feminine. She has brought the female shaman into the modern world in a grounded and practical way, as did the late wonderfully talented Gabrielle Roth, with her Urban Shaman dance path.

Lyn Andrews, offered insight into the power of women through her writings on shamanism and the women that she was taught by, many books I find are rather a light read and somewhat commercial in delivery however she has offered a bridge to many women to see the power of women in shamanism. In a few books I have read of hers, there were definitely shiny pearls that I have kept in my knowing.

Tenzin Palmo has offered a great example through her building of a monastery for female monks in Tibet. In her book ‘The Cave in the Snow” she saw how women were never or rarely considered in regards to the right to enlightenment. Through Tenzin’s persistence, resilience and commitment she is working hard to offer women the same right to wisdom that the masculine has possessed in ownership and women have bowed down too for centuries. She made the Dalia Lama aware of this imbalance and with insight and an ability to embrace the needs and rights of women he agreed that things need to change and prepared the way for her to carve a path for Tibetan women who want to follow the Buddhist path as an equal right.

Women are the natural midwives of the spirit. Our attraction to these pathways is natural. Fear of our own power is something that we are all trying to unlearn. Power does not mean dominance or control.

I have found the greatest strength when in service of another by metaphysically cutting off my head, being receptive and listening to the soul of my client. The ego to me is very masculine so before I begin I meditate and call in my spirit clan and ask ‘Please spirit, help me get out of my own way so I may be of service’ That to me is how I am nurturing the feminine medicine path and learning to find balance between the doer and the receiver.

We women who have been born in this time are very fortunate. We have come a long way, but we still need to heal our own collective fear of persecution. There are women today that are being burnt for witchcraft, stoned for loving, and killed for being raped. We the women who are able to claim our freedom need to help other women reclaim theirs and one of the best ways is via education and living examples.

If woman by nature is a shaman, then woman by nature is a transformer. The waiting is over. It is time to stand in support of one another not as bullies or pushers, but as sisters and midwives. Its time to collectively claim and recapitulate that, which has been fragmented.  So we can be of service to the ‘whole’ of mankind.

23 thoughts on “Women. Shamanism and Spirituality”